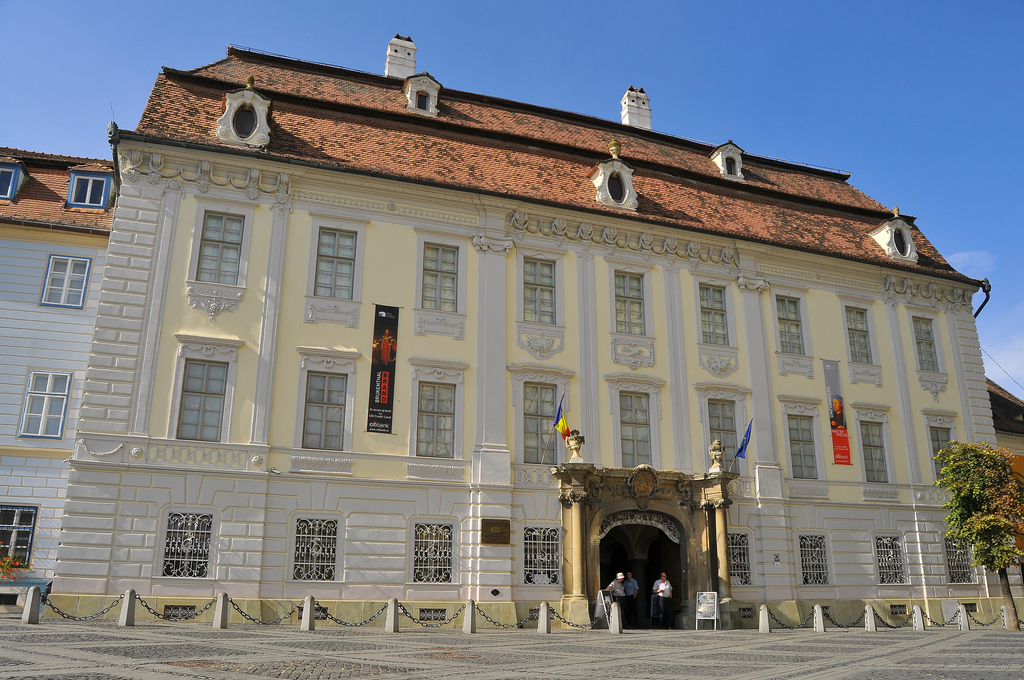 The Brukenthal Palace is a symbol of Sibiu City, being the first museum of Romania, open to visitors since 1817. Its existence is due to prominent personalities of Transylvania’s history – Baron Samuel von Brukenthal – Governor of this province in the second half of the 18th century (1777-1787). The palace was built after the pattern of Vienna’s palaces in the late baroque style.

Currently, the palace building and the collections of Baron Samuel von Brukenthal represent the core of Brukenthal National Museum.

On the first floor of the museum, the visitor is introduced into the atmosphere of the 18th century of the reception Rooms, where the original silk tapestry, painted canvas or oriental motifs decorated board, tile stoves brought from Vienna and gilded lime-wood sculpted medallions (called supraporte) are still preserved. The following exhibitions can be visited: Medieval Art in Transylvania, Anatolian Carpets, as well as the segment with German and Austrian Paintings of the European painting collection.

On the second floor of the museum we find other two important segments of the mentioned collection: Flemish and Dutch Painting and Italian Painting. In 2007 the special exhibition entitled Masterpieces of the Brukenthal collection was inaugurated, which includes 23 works that were recovered after being confiscated in 1948 and stolen in 1968.

The patios of the Brukenthal Palace were open to visitation in 2008, accommodating the exhibitions of the Plates Study and Cartography Study, as well as the Gessoes Exhibition, Transylvanian stone sculpture during the 13th and 19th centuries and Gothic: neo-gothic experience vs. the illuminist pattern.