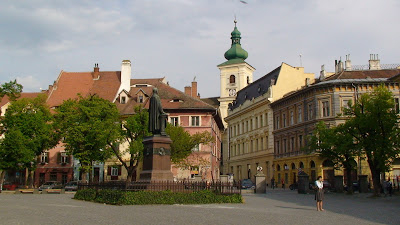 Albert Huet Square can be considered the heart of the old citadel, formed on the pathway of the first fortified precinct of Sibiu, dating since the 12th century. The buildings were built on the spot of the old walls when the fortification lost its practical purpose, once with the complete consolidation of the Upper Town.

In 1415 it is mentioned here the chapel having St. Iacob (Jakob) as a title saint, where Alderman Albert Huet, whose name was subsequently assigned to the square, established in 1592 the ecclesiastic and school library, which used to activate nearby since 1380.

The only element that survived from the first defence belt of the city is the Stairs Tower, one of the few Roman constructions of Sibiu, dating since the 13th century.

Representative for Huet Square is the Evangelic Church, which has a 73,34 m high bell-tower, that makes it visible from almost any corner of Sibiu.

We also have here the statue of Bishop Georg Daniel Teutsch, carved in brass in 1899 by Adolf von Donndorf.

The parochial house – among the oldest buildings of Sibiu,

The Rest Home Church – on the place where it allegedly used to be an older stone building, mentioned as a hospital in a document from 1292, being the oldest documented mention of a hospital in Romania.

The Albert Huet Square ends with the Stairs Gangway, which offers a representative image of medieval Sibiu, being an exit gate towards the Lower Town.