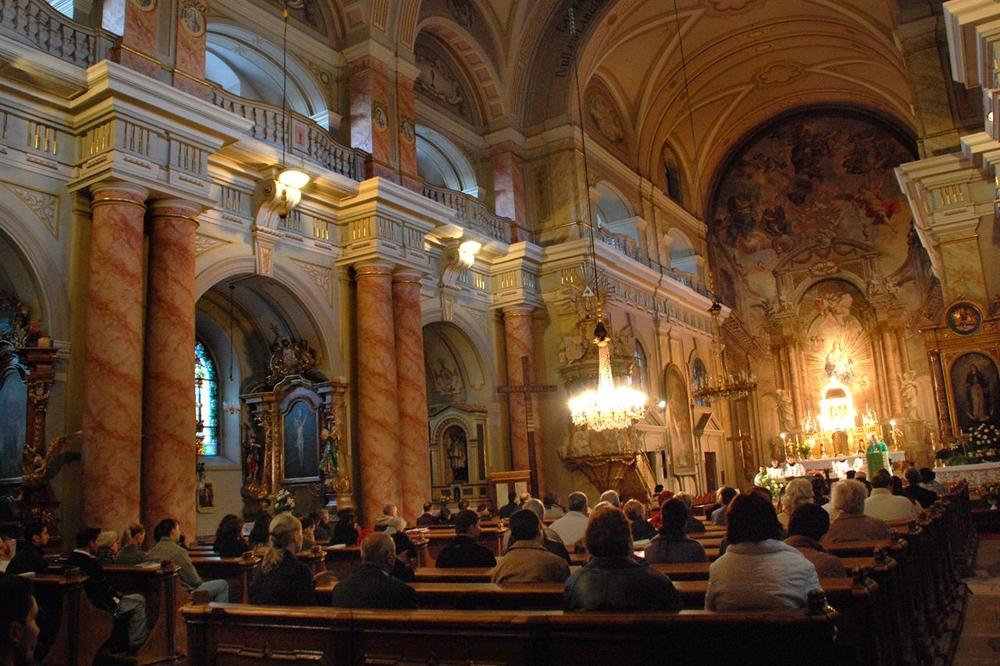 After joining the religious reform, the city of Sibiu was left for almost 150 years without a Catholic church. As a result of the Leopoldine Diploma in 1691, Austrian troupes arrived in Sibiu, together with Catholic military priests. For the soldiers it was allowed to celebrate the Catholic service in the so called Hall of Tailors from the Large Squar, right on the spot of the Catholic church of today.

After long talks with the protestant council of the city, the construction of a Catholic parochial church was able to start. On July 4th 1726 the headstone was place and on September 13th, 1733, the church was sanctified by the Bishop of Transylvania, Baron Georg von Zorger.

The interior structure of the church is that of a rectangular shaped hall, with a tribune on the Southern side. The confession chairs are dating since the Jesuit period. The painting of the aisle was done by the German painter Ludwig Kandler and is dating since 1904. The interior fresco decorating the main shrine is extremely valuable, a representation of the Virgin and Child. The stained glass windows were manufactured in 1901 in Budapest. The current organ of the church, installed in 1860, was manufactured by the organ manufacturer Karl Hesse of Vienna.

Another interior valuable element is the funerary monument of the General Count Otto Ferdinand Traum of Abensberg (1677-1747), military commander of Transylvania during 1744-1747. The monument is on the right side of the shrine, being manufactured by the carver Anton Schuchbanu of Cluj.

The tower of the church has a representation of an arched alleyway, connecting the Large Square to the Small Square of Sibiu. The tower was finalized in 1738 and it has four tall stories and a dome. The tower clock with dials towards the two squares is dating since 1838. On the other side of the tower, the crest of the roof is provided with a light turret.

"Dintre Brazi” Church (“Between the Firs”)