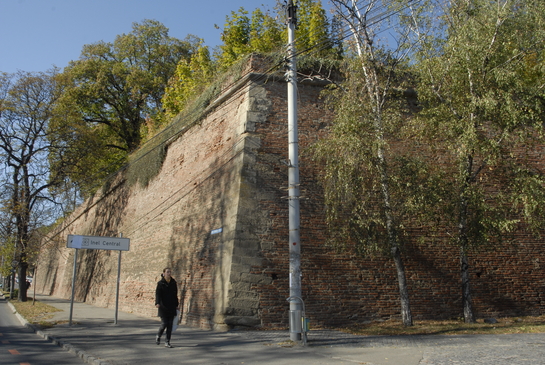 This is the first ever bastion built in Sibiu and one of the oldest of Transylvania, its construction being started in 1551 by the Habsburg military commander Castaldo, based on the layouts of architect Alessandro Clippa, during the Mayorship of Petru Haller. The bastion was supposed to provide security for the road coming from Brașov as well as for the South-Eastern corner of the citadel.

Haller Bastion is made of brick and filled with soil, having walls with a total length of 223 m and a maximum height of 9 m. Its shape is similar to the ace of spades. For a better defence, the walls are provided at approx. 1 m from the upper limit with spacers made of rock that would prevent the installation of siege ladders.

The openings of the blockhouses for the cannons are preserved to this day, both towards the Thick Tower (two), as well as towards Manejului Street (three). The “eyes” camouflaging the blockhouses that used to provide fire cover of the bastion flanks are noticeable.

In 1771, since it was no longer necessary for the protection of the citadel, Haller Bastion was used by the Austrian army, the owner of the land, as equestrianism school.

The school was active until 1911, when the Public Financial Administration took over the bastion and opened a midwives school which subsequently became a maternity hospital.