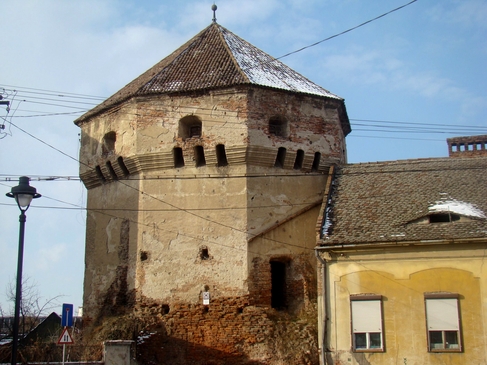 The Leather Merchants Tower, also known as the Small Powder Tower, is located on Pulberăriei Strteet and is dating since the 15th century, being one of the two towers preserved in the Lower Town. The tower used to be part of the fourth fortification belt of Sibiu.

The name of the tower comes from the leather merchants’ guild who had their shops in this part of town and were in charge of its security and maintenance.

The Leather Merchants Tower has an octagonal shape and is built on four levels, the last one being protuberant with a pyramid shaped roof. Here we can see large cannon embrasures for the first time. Each side of the tower has black oil holes and firing embrasures for light artillery, more numerous on the exterior side. The roof has a rectangular shaped metal wind flag, which seems to have appeared recently, after the mid of the 19th century.

The Leather Merchants Tower is considered a great survivor of Sibiu City, being destroyed and rebuilt several times over the years. During the great fire of March 31st 1566, the tower exploded due to the powder stored therein. The tower was afterwards affected by a catastrophic fire which occurred on September 7th 1570, followed by a third explosion on August 28th 1638 due to a lightning. It was rebuilt during the same year.